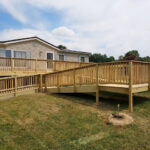 Many Volunteers in Mission (VIM) Teams are groups that have been meeting for years and helping in their community. This is the case for the Allport-Bigler-Woodland Workcamp. These volunteers build community as they spend a week in the Woodland, PA, area. This year the workcamp consisted of 40 volunteers. Even though it has been running for years, they welcomed 8 volunteers to their team that were new to missions. The volunteers and the individuals at the sites enrich each other’s lives so much. Thank you ABW Workcamp for your love in action! Thank you, Roger, for sharing your experience… — Michelle Schwartzman

I had the distinct privilege of sharing my God-given gifts and talents, limited as they may be, with persons in need in the Allport-Bigler-Woodland area of Clearfield County, PA, June 19-24. I have been blessed to be able to participate for 9 of the 11 years of this workcamp. Our efforts are based on 1 Peter 4:10, which states “Each of you should use whatever gift you have received to serve others, as faithful stewards of God’s grace in its various forms”.

There were 33 individuals, families and/or institutions on the request list for this year’s workcamp. The projects ranged from straightforward items like yard work, interior cleaning, power washing, exterior painting and hauling/stacking firewood to more complex items like replacing a porch, installing fencing and building decks/wheelchair ramps. I haven’t seen the final report on all that was accomplished, but I know we made a difference in the lives of every person we interacted with during that week.

I spent the first three days of the workcamp as part of a team building a deck and wheelchair ramp. The husband was recently in the hospital and is now confined to a wheelchair. The problem was, he had no way of getting out of his house in case of an emergency or even to go to a doctor’s appointment. When he was released from the hospital, four individuals carried him up a steep set of stairs at the rear of the house and placed him in a wheelchair inside the home. That’s what his world consisted of when we arrived. In those three days, we built a 10×20 foot deck and the structure for the first phase of the much-needed wheelchair ramp. Unfortunately, we had to stop midway on this project after those three days, because my team leader had to return home. However, a group of people (most of whom had been part of the workcamp) came together after the workcamp to finish the ramp and give great hope to this family. 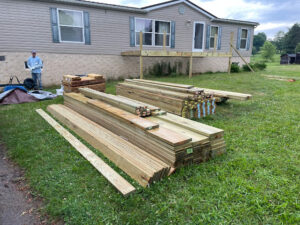 On Thursday, I replaced two storm door latches, sanded, primed, and painted an exterior door of a large house for an elderly widow. Others power-washed the entire home and cleaned ceiling fans and lamp shades on the inside. On Friday, I helped dig six 36” deep holes in shale so that posts could be set for the building of a deck and cover to be attached to a trailer. The owner purchased the FEMA trailer and is making all the preparations to turn it into their home. They are currently serving overseas in the U.S. military but are soon due to return to life in Clearfield County. Every time we dug rocks out of the holes and got closer to the 36” depth, more rocks fell in making the process agonizingly slow. 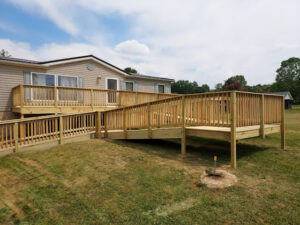 I can honestly say that I was physically drained by the time I drove home to Mechanicsburg on Friday afternoon, but I can also say that I was greatly blessed by the experience and look forward to “sharing my gifts” with the people of these Clearfield County communities in the future.

Please be open to these types of mission opportunities, whether it be here at home, across the region and state, or wherever God calls you to serve. Let us all be doers of the Word, and not hearers only.